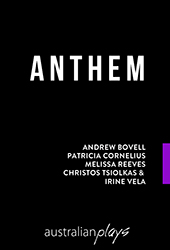 by Andrew Bovell, Patricia Cornelius, Melissa Reeves, Christos Tsiolkas, Irine Vela
Anthem takes the pulse of the nation in a series of intersecting and sometimes brutal stories about class and race. It captures a nation in conflict and uncertain of its identity. The action is set primarily on trains where our conflicting identities compete for ascendency or simply for space and the right to be seen.

In Uncensored Andrew Bovell creates a chorus of commuters caught on the endless cycle of having to make ends meet and drills down into a violent incident on a train between a white women and a Muslim ticket inspector. In 7-11 and A Chemist Warehouse, A Love Story, Melissa Reeves tells the story of two low paid workers who set out on a Bonnie and Clyde like mission to take on capitalism. In Terror, Patricia Cornelius tells the story of three women who face increasing economic uncertainty. Here, it is not only class that places these women in jeopardy but their gender. In Brothers and Sisters, Christos Tsiolkas tells the story of a successful man returning to Australia from Europe, hoping to transform the lives of his three siblings who never escaped their tough upbringing. The individual stories are held together by Irine Vela’s score Resistance. Vela also takes a key character from Tsiolkas’s play, an elderly Greek woman and reminds us that political struggle has a history and that those histories are a part of our ongoing national narrative. 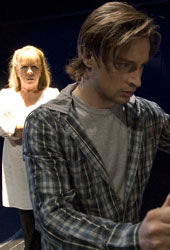 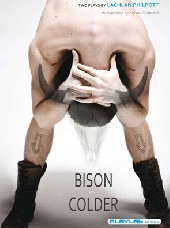