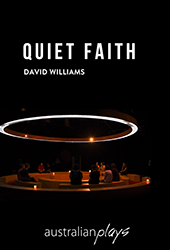 The place of Christian faith in Australian politics is often linked to conservatism and intolerance. Many members of the current Federal Government profess deep Christian beliefs and groups such as the Australian Christian Lobby loudly intervene in public policy debates.

Yet, new faith-based social movements such as Love Makes A Way actively campaign against government policies. The spectacle of religious leaders undertaking non-violent acts of civil disobedience, including prayer vigils in the offices of Christian politicians, has captured the imaginations of many. Other Christians work less publicly to separate church and hate in their own communities and congregations.

Quiet Faith has been generated from hours of interviews with Christian Australians, each of whom has also selected a personally significant song. Beautiful, immersive, full of musicality and heart, Quiet Faith is an antidote to despair about religion and politics, offering a portrait of the very different ways that faith can underpin civic life.

Quiet Faith was co-commissioned by Vitalstatistix and HotHouse Theatre and is supported by the Australian Government through the Australia Council, its arts funding and advisory body.