THE SOUND OF WAITING 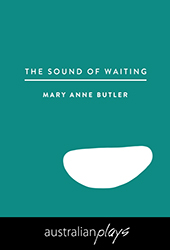 THE SOUND OF WAITING

A night. A storm. A raging ocean.

Hamed Mokri stands on a tiny wooden boat on high and stormy seas, cradling his small daughter as he journeys to find them a place of Hope and Possibility.

Meanwhile; an Angel of Death hovers nearby; conjuring up all its powers to send them both to the very bottom of this unknown sea - silent, and black, and endless.

Written in response to Tony Abbott’s infamous comment, “Jesus knew there was a place for everything, and it’s not everyone’s place to come to Australia”, The Sound of Waiting is a powerfully poetic allegory for our times, exploring displacement, resilience and hope in a world that has closed its doors on humanity.

“The Sound of Waiting should be on every stage in every city and town of Australia.”– Real Time.

“…luscious, savage, corrosive, pulsating with action and yet also graced with high lyrical poise and astonishing beauty. The Sound of Waiting is an utterly compelling work that takes your breath away almost unbearably." – NSW Premier’s Literary Awards Judges

Mary Anne Butler is a multi-award winning writer from the Northern Territory. Her play Broken won the 2016 Victorian Premier’s Literary Award for Literature and Drama.