THE RIVER AT THE END OF THE ROAD 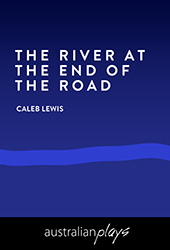 THE RIVER AT THE END OF THE ROAD

Flo and her dad, Ford, live alone on the edge of the river. With Mum gone and Ford busy operating the ferry, Flo dreams of adventure, little dreaming how close it lies.

The River at the End of the Road is a play about Flo Sheppard, a girl caught between two worlds, and her dad who works the ferry, and her mum whose absence haunts them both.

Every decade when the river is at its lowest, folks from both sides of the river, the living and dead, come together for a nightlong celebration they call The Ebb. But when Flo fails to find her missing mother, and the river starts to rise, she and a newfound friend will steal her dad's boat, striking out for the opposite shore, and then onward to the coast, looking for answers and unleashing chaos as they go - even as her desperate father searches for a way to bring her safely home.

The River at the End of the Road is an epic, rollicking tale, with a heart as big as the Murray. A play for all ages about love, family, loss – and finding the courage to let go.

The play was commissioned by Hothouse Theatre and co-produced with Sport for Jove, directed by Damien Ryan.