THE SISTERS; OR, GALILEO'S PENANCE 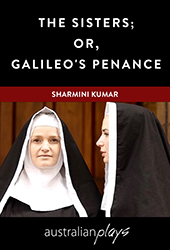 THE SISTERS; OR, GALILEO'S PENANCE

The Sisters; or, Galileo’s Penance is based on the true story of Galileo’s two illegitimate daughters who became nuns. In the wake of the scandal about their father’s views on science, these women deal with the implications for themselves, their faith and their place in the world.

This is a personal story about two women who have been abandoned in the world, two women whose talents would never be widely known. Their frustrations and confusion and ultimately their bond is still relatable today.