HOLY CLAPPERS: A STORY OF FOLLY AND STUPIDITY 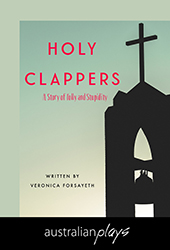 HOLY CLAPPERS: A STORY OF FOLLY AND STUPIDITY

by Veronica Forsayeth
Kalpah is a small country town in the northern plains of South Australia. The name Kalpah apparently derived from the aboriginal word “kallapah” meaning “place of screaming parrots”. The town is a typical mix of small minds, local intrigues and unresolved conflicts. As is common in small towns, many residents are volunteers on several community committees and are often employed by the local Council. Following an incident of falling masonry from the bell tower of the St Malachi’s church, the local Council has issued a demolition order. As the Parish has no money to repair it they opt to demolish it, with Council assistance. All the town’s community groups claim ownership of the bell, made from the casing of a shell used at the Somme and donated by the family of the only son killed in WW1. The bickering escalates and the groups decide to get ownership of the bell from the 100 year old Dymphna Wilson by fair means or foul. Things take a turn for the worst at the November 11th Remembrance Day service, with the shocking announcement that the bell has been stolen.
Fury, suspicion and accusations abound within the community, each group blaming each other for the theft. All groups are sent an anonymous letter by a phantom, threatening the bell’s destruction if they don’t produce a Nativity play on Christmas Eve. Under strict guidelines laid down by the phantom, they rehearse, make costumes, sets, and learn their lines. The group dynamic gradually changes into one of reluctant and begrudging cooperation. Finally the Christmas Eve play is performed. At the singing of Silent Night, the bell is heard over in the tower. Who the phantom was, we’ll never know….or do we?