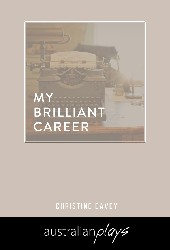 Adapted from the novel by Stella Miles Franklin, My Brilliant Career is the story of Sybylla Melvyn - a girl growing to woman, growing to adventurer. Life on the land is difficult for a young, independent woman with spirit and ambition and when Sybylla meets the eligible and rich Harry Beecham, she must decide whether her future lies in marriage or a career. This is the narrative of a burgeoning nation, a forming feminism, a woman coming into her own as a human, an artist and an independent thinker. My Brilliant Career is a tale of language, landscape and love set to the rhythm of a complicated national consciousness. This theatrical re-imagining is also the story of Stella Miles Franklin herself and her role within the creation of her timeless classic. The two women - creator and creature - weave and dance through the narrative.