ALL IN A DAY'S EFFORT 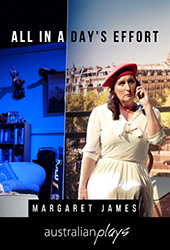 ALL IN A DAY'S EFFORT

Bill and Mona Toffey are a married couple, not necessarily happy with life. They struggle with life's complexities. Bill, a funeral director, is obsessed with footy, his forgetfulness and hearing difficulties, and Mona is obsessed with her mother-in-law, Harriet (who lives with them) and her own lack of personal freedom.

Mona arranges for an assessment of Harriet with the view of having her admitted to an aged care facility. As it happens, the initial Aged Care Assessor, Peter Dankweld, has his own personal agenda. He is on the look-out for his biological mother having been adopted at birth. Mona seems to fit the bill. This compounds problems for Mona (and Bill.)

Migration to the moon is considered as solution to the booming elderly population.

All in A Day's Effort tackles the issues of identity and death and is even more current today with euthanasia now being part of current socialisation and general thought.

The play has four main characters with some minor roles as well.