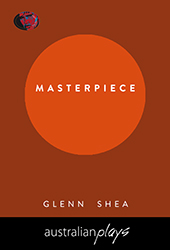 An Aboriginal worker from the stolen generation now finds himself living as a recluse in the middle of the desert. The issues from his work as a juvenile justice worker has impacted his life to the point where he has lost everything. He is battling his demons and believes he is of no value and wants to die alone drinking and trying to paint his Masterpiece. Little does he know, his life is just about to take a different direction when Hope steps off the train.

"The contrasting Masterpiece, while a thriller set in a remote location, is at the same time both lyrical and richly layered. Telling a story of Aboriginal trauma and resilience at a time of potential change, hope emerges with the realisation that the “masterpiece” is not a painting but rather the immediate image as it is reflected in a mirror." - Vanessa Cartwright, South Sydney Herald, 2015