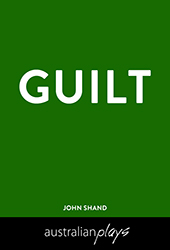 by John Shand
Set in 17th-century France and based on historical events, Guilt tells of the charming, clever, philandering French priest Urbain Grandier (1590-1634), who accrues male enemies and lovelorn women with equal ease. When an entire convent of nuns becomes besotted with him he is accused of witchcraft. The play contains countless parallels with a current world contaminated by a culture of lies, clash of religions and abrogation of human rights. It also explores the overlays and friction between sexual and spiritual rapture: how one might fuel the other, and how one might be misconstrued as the other. Ultimately Guilt depicts a collision between the lives of five people who can’t tell truth from falsehood. Its focus on the inner worlds of its characters sets it apart from other works (of theatre, cinema and opera) that have dealt with these historical events.

The dream-like quality of the verse of Guilt may be partially attributed to the play being written almost exclusively between the hours of 2am and 4am. It was then developed with input from the great British theatre-maker, Steven Berkoff, and via readings by Scena Theatre in Washington DC, before receiving its world premiere from that company in 2018.