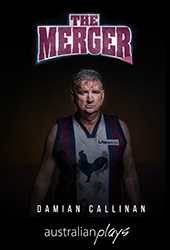 by Damian Callinan
Troy Carrington, a former professional football player returns to his country town after an abrupt end to his sporting career and is persuaded to coach the hapless local footy team, the Roosters. To find enough players though he has to enlist some recent asylum seeker arrivals.

THE MERGER premiered at the 2010 Adelaide fringe before going to earn Damian Callinan his 3rd Barry Award nomination at the Melbourne International Comedy Festival. Since then the show has been intermittently toured throughout the country, including seasons at Sydney's Seymour Centre, Brisbane's Powerhouse & Holden Street Theatres and as well funded tours of WA, SA, Victoria & Tasmania. THE MERGER is now also an award winning feature film.