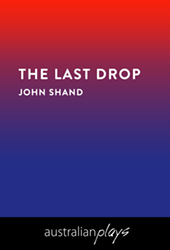 by John Shand
Western civilisation has crumbled under the impact of economic meltdown, environmental catastrophe, pestilence and war, and survivors have fled the cities. Mary and Joe live alone in the sand-dunes, desalinating sea water with a ramshackle still Joe has devised. Theirs is a harsh existence, eating insects and what crustaceans they can find in the blasting temperatures, and tending the precious still. Their once-strong love is just another faded memory, like those of creature comforts in a previous life. In the absence of a bucket, Mary spends her life traipsing to and from the surf to bring water for the still in her cupped hands. Embittered, Joe has become almost as hard as the world, itself, and he and Mary – who has not expunged her softer side – bicker constantly upon endlessly repeated themes.

Their harsh, lonely lives are suddenly invaded by Valentino, an entrepreneur, optimist, trader, pimp and shark, and Esmeralda, who appears to be his accomplice and whore. One night in the company of these outlandish visitors is enough to tear apart the remaining rags of Joe and Mary’s relationship, and yet it also roughly stitches up other aspects enough for Joe to crudely play dentist to Mary when she is afflicted with unbearable toothache.

In the wake of this the still is destroyed when they apparently receive other visitors. Valentino and Esmeralda stumble upon them once more to find Joe half dead and Mary at her wit’s end. Truths emerge about both relationships that leave Mary with only one way out.

The Last Drop is an exploration of four characters placed in extremis, and their diverse ways of dealing – or not dealing – with their predicament. In style the play's language is heightened, like the light and heat, and sometimes even ritualistic.