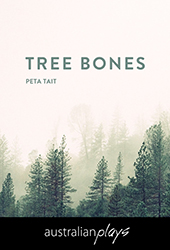 by Peta Tait
Tree Bones is about lives enmeshed in the natural environment and those who witness destruction in the places they love and seek to protect. It is set at a time when the course of events could have been altered, in places that still hold many possibilities. The emotional feelings of loss reflect the present of facing a changing climate.

West Coast, New Zealand. Sarah remembers her daughter, Laurel, adventurously embracing the world around her. Sarah remembers Laurel as a child in 1940, as an environmentally aware young woman in the 1950s marrying Felix, and in 1964 facing cancer with courage at a time when patients were given minimal information and treatments limited.