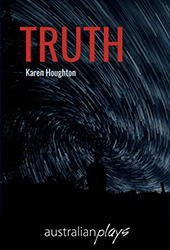 TRUTH tackles critical contemporary social issues of consent, abuse of power and cyber bullying. Part courtroom drama and part frenetic flashbacks, TRUTH trawls through the actions of a young man accused of sexual misconduct. Is he guilty? Innocent? The audience can decide.

TRUTH uncovers the events at a party where a young man is charged with rape. Set in a courtroom, the incident is explored via flashbacks to the hours leading up to the event and the days immediately after.

Ted and Jess had been a couple for nearly a year, but had recently split. After an explicit photo turns up on social media, Jess accuses Ted of hacking her facebook account in an effort to hurt her. Boozed up and denying the allegations, Ted agrees to meet Jess at the party, where they leave the confines of the house to thrash it out. What happens next is blurry; a sea of miscommunication, assumptions and alcohol-fuelled accusations.

Ted believes they have got back together.

Jess accuses him of rape.

What is the truth?