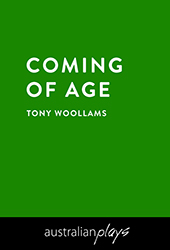 by Tony Woollams
This is a drama of war. A world war that changed the course of history. A class war resulting in the death of old attitudes and standards of a war that emancipated a country too long tied to the apron strings of Mother England. A war for women for their right to choose their destiny, to choose what they want to do with their lives and to work as equals alongside men. Beginning at the start of WWII it follows the early teen-age years of Peter and Jenny.

Peter wrestles with the overbearing expectation of his father, with entrenched attitudes of white Australia. Pete is the easy-going larrikin type who does not like being told what to do and does not like authority, particularly that based on tradition.

Jenny is almost old before she is young. She is of dark complexion which causes concern for Pete's parents. She has been brought up by her grandfather Pops, a working-class Labour man. She experiences youth, almost missed out on because she has started work so young, and romance with Peter, or Pete as she calls him, who is still at school when they meet. This blossoms into a clandestine marriage. She grows up even more through the adversity of rationing and restrictions at home, the uncertain fate of her young husband, now serving overseas and the birth of their son. Like many girls in Sydney then, she does her bit entertaining American servicemen struggles only to the end of the war dealing with the fear of unemployment as Australian soldiers return to re-enter the workforce.