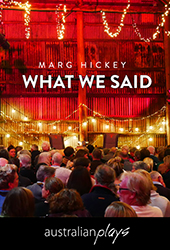 by Marg Hickey
What We Said is about the conversations we have and hear every day. It’s about what we say and what we don’t and how words can harm and heal.

Funny, heartbreaking and true - in a world full of shrill proclamations, What We Said encourages us to lean in and listen.

What We Said is a delicious rumination on contemporary relationships. It is funny and true and heartbreaking. In this play, Hickey bursts through clichés and delivers modern Australia. She is an exciting new talent.