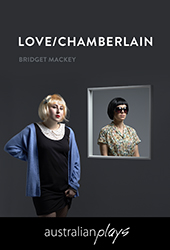 by Bridget Mackey
Courtney Love meets Lindy Chamberlain on a remote highway somewhere in Australia, seeking an elusive Oracle. They form a highly unlikely connection, sliding in and out of time, guided by memory and loss.

A series of chance encounters unfold. These extremely different public figures, both vilified within their own time, find each other during turmoil. One, upon the disappearance of her baby Azaria, the other in the ferment of rumour following her husband Kurt Cobain’s death. Both women are unjustly accused of murder: Chamberlain in the ravenous media landscape and Australian law courts, and Love in the equally seedy territory of conspiracy theorists and documentary moviemakers.

Love/Chamberlain is a play about grief, public judgement and the demonisation of women. Can any woman ever go unscrutinised for her behaviour in the public eye? And why is it easier for people to believe a lie over the complicated and painful truth?

Love/Chamberlain asks you to shake up your own assumptions about Courtney Love and Lindy Chamberlain in order to experience their unique perspectives. It explores how we resort to faith, magical thinking and the supernatural when standing on uncertain ground. Prompted by the reverberations of pain, we go looking for miracles and wonders.

Can the hedonistic Courtney and deeply devout Lindy respond to each other’s sorrow and guilt? Or will they remain constricted by the power structures and outmoded archetypes that separate them, spinning in the isolation of their ever-repeating grief?

Please note: this is a creative work and does not represent the thoughts, feelings, words or actions of Lindy Chamberlain or Courtney Love.

“The beautiful, dreamlike way in which Love/Chamberlain’s script and set spoke to each other still gives me a little shudder. The audience were so still, tipping forward in their seats, leaning into this gentle grief world where two blamed and shamed women – Courtney Love and Lindy Chamberlain – met and shared a moment in a dream desert.” – Fleur Kilpatrick, Playwright, Director & Arts Commentator.

“Love/Chamberlain at Theatre Works may be the most fascinating script I’ve seen this year” – Anne-Marie Peard, Sometimes Melbourne. 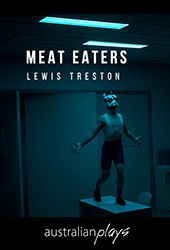