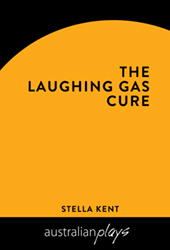 by Stella Kent
Dr Thomas Beddoes is convinced that consumption can be cured by inhaling the breath of cows. Furthermore, aided by his brilliant young assistant Humphry Davy, he embarks on a series of experiments to prove that miraculous cures can be effected by inhaling nitrous oxide.

But his friend, the foppish Joseph Banks who has recently returned from his voyage with James Cook, is less convinced. When Banks discards his dandified exterior and sets out to befriend the King and organise the establishment of Botany Bay as a penal colony, the friendship rapidly deteriorates.

In the end both men are bitterly disappointed. Beddoes must finally admit his experiments with gas have failed, that nitrous oxide, ‘laughing gas’, is useful only to fuel riotous parties, and he must acknowledge that the hard-headed new concept of ‘science’ is replacing his own imprecise but human experiments. Banks has poached the brilliant Davy from him, and his wife Anna runs off to London to be with Davy. Banks himself, even though he pulls the strings of Empire, is immobilised by gout, enraged that the experiment that is Australia appears to be failing, and realises that the sense of adventure and original discovery he once experienced in Tahiti are forever over.

An important element in any production is that the audience adopt ‘roles’, for example as patients in Dr Beddoes’ Institution. This sometimes involves audience members being brought into the action onstage.