WE THREE, THE SEA 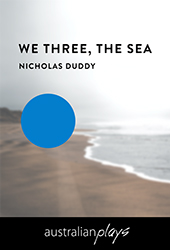 WE THREE, THE SEA

1953. After meeting aboard a Ten Pound Pom ship to Australia, Anne Warren and Rose Peters fall for one another. Over a lifetime, they defeat the forces driving them apart – until dementia threatens the legacy of their love.

2005. Following their daughter's freak death, Honey and Sweetie confront not only the pain of the past, but the futility of any future. Over one year, they decide to reunite with her in the only way possible: death.

2027. After five years apart, @ and # match on a dating app that calculates 'true love.' They reunite and, over one day, grapple with the question that forever haunts them: why did their relationship fail before?

A mosaic of memory, We Three, The Sea traces the love and loss, longing and loneliness of three couples connected by a coastal Australian town through time.