UNTITLED, OR THE SEAT OF NARCISSA 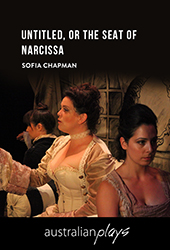 UNTITLED, OR THE SEAT OF NARCISSA

by Sofia Chapman
The Baroness of Inverness arrives at the seat of Viscountess Narcissa ostensibly to seek her political support, but secretly desiring education in the arts of love.

The Viscountess is so narcissistic that she is too enamoured of herself to notice the Baroness initially, and also is in the habit of seducing local ladies merely to conquer their grounds; however the Baroness' resourcefulness and persistence in attempting to win Narcissa's heart through poetry begin to have their effect.

Narcissa falls for a local Duchess at this time however, and the Baroness undergoes the strain of being the secret and second paramour until Narcissa determines to leave her and travels abroad.

On her return the Baroness takes her revenge in accepting a Marchioness' request to take her home as her lover after winning a game of peccadilloes.

Narcissa disbelieves that she would do this and awaits her Grand Amour, but is beseiged by uprising peasants and disgruntled former lovers.

Ultimately Narcissa is doomed to drown in seeking her own reflection, yet has her revenge on her suitors as they are equally doomed to write and think of her forever more.