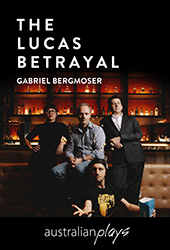 by Gabriel Bergmoser
After a poorly received return to the beloved fantasy saga he created, director Robert Stone is a Hollywood disgrace.

Kicked off his own franchise in favour of younger directors, Robert is ready to put the whole thing behind him.

But when a night of drunken wallowing leads to a chance encounter with his successor, Robert is forced to confront – and defend - his own legacy.

Is artistic integrity more important than giving your fans what they want?

And is this showdown between past and future really a coincidence?