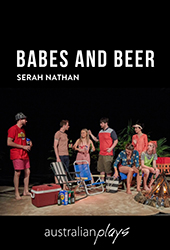 Set in the present day and taking place around a bonfire, the women encounter fellow tourists who challenge the protagonists' understanding of themselves and of each other. The story playfully explores the consequences with addiction to instant gratification and asks, “How much agency do women have over their own happiness?” And, “Do young Australians rely on alcohol to enjoy themselves?”

Referential language encourages the audience to feel as though they are on the beach with the actors, without breaking the fourth wall. Bold dialogue reflects how people, specifically women, converse in the safety of their friendships groups. The story is meticulously interwoven with nuanced subplots that act as a through line when the protagonists are separated. Marketed as an ‘anti-play’, Babes and Beer was written for people who’d rather stream their entertainment, don’t mind eating crisps in bed and who haven’t been to the theatre before.