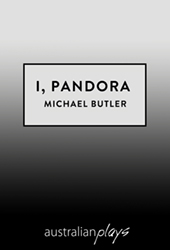 by Michael Butler
At the heart of the play is the character of Pandora: that mythological woman who lifts the lid on all the woes of the world.

Using an appropriate theatrical form that borrows much of its style from Classical Greek Theatre, the play explores the context, backstory and nuances of the fable and, in doing so, moves beyond the well-known trope of the unlocking of the forbidden chest and adds flesh to the bare bones of most people's knowledge of the tale. Interspersed throughout the re-telling of the myth is a more contemporary story that mirrors the events and themes of the classical Greek account: the story of a cantankerous elderly woman, Ida Sallinger, around whose memories half of the play unfolds. While much of the account of Ida relies upon a more naturalistic approach, the structure of these scenes is also episodic and - at times - choric in nature.

It is the way in which the two stories resonate with one another that creates the overall impact and the opportunities that the play presents to explore creative staging choices that make it an exciting text with which to experiment.