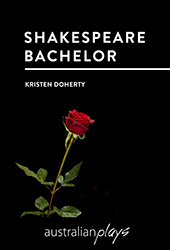 by Kristen Doherty
William Shakespeare has entered the Bachelor Mansion in the search for his one true love - the greatest character he’s ever written. Guided by loveable host, Osher; ten Shakespearean bachelorettes must fight for the glory of Will’s final rose and will stop at nothing to win his heart.

Following the structural formula of the hugely popular reality television show The Bachelor, ten of Shakespeare’s most beloved heroines are the contestants vying to be the last bachelorette standing.

Lady Macbeth, Ophelia, Titania, Juliet, Cordelia, Beatrice, Viola, Katherine, Tamora and Cleopatra are plucked from their other-worldly realms and thrust into the spotlight of reality TV. Bringing with them the aftermath of their own twisted stories, they must compete in such date challenges as Ye Olde Wheel of Fortune, Bear Baiting, Medieval MasterChef Cooking and Insult Jousting to win the honour of becoming William Shakespeare’s most beloved.