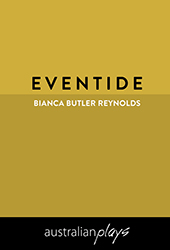 by Bianca Butler Reynolds
Michelle is a committed mother who sometimes has trouble leaving the house. Jemima is beautiful, successful and hasn't been home in eight years. Heidi ran away at sixteen to join the circus. None of them know how to talk to their dad, and they're running out of time.

When Dex Murdoch is diagnosed with a brain tumour, his three estranged daughters converge on the family home in the small coastal town of Eventide, to be with him in his final days. On the same day as their arrival, a fairy penguin washes up on the beach outside Dex's home, miles from where he should be. Over the course of several days, tensions, secrets and an unexpected act of violence bubble to the surface of this fractured family.

Eventide is a meditation on sibling rivalry, father-daughter relationships, and what matters when you're forced to say goodbye.