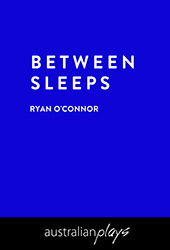 by Ryan O'Connor
A new crewmember, Monty, wakes from cryo-sleep to take his shift on a long-distance deep-space colony ship, and attempts to connect to the rest of the crew - only four humans awake to watch over the sleeping cargo. Desperate to make any kind of human connection after five years in isolation, with a further thirty to come, he and the ensign, Fariah, begin a fling, avoiding the attention of Captain Flyte.

However, when the wave front of a supernova reaches the ship, an ominous knocking begins, Gwen begins to have strange dreams of haunting figures, and the ship’s computer, VAC, appears to lose its mind. The ship goes into lockdown, trapping Monty and Fariah together, and scans make it clear that only one of the two is human. Alone in a dark room, they try to flesh out their trust for each other and their faith in the other crew members, but the tangled web of suspicion deepens as a voice that sounds like Flyte tries to turn them against each other and Gwen enters, brandishing a rivet gun and panicking under the pressure of the ominous knock, knock, knock-ing.

As they attempt to get the ship working again and find the missing Captain, they are finally confronted with the source of their terror: an inhuman creature that feeds on their panic. However, the creature is also pursued by the knock, knock, knock-ing and flees, but not before driving Gwen mad. The ship returns to normal, Fariah and Monty attempt to explain the events to the nonplussed Captain, and Gwen attempts to free herself of the haunting knock, knock, knock...