UPSIDE DOWN AT THE BOTTOM OF THE WORLD 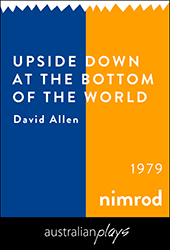 UPSIDE DOWN AT THE BOTTOM OF THE WORLD

by David Allen
This script is part of the Nimrod 50 Collection and is a premiere publication.

D.H. Lawrence in Australia. The famous writer and his German wife spend six months on the New South Wales coast, brawling, squabbling and remembering England - much to the amazement of their conservative neighbours. Set in 1922, the play explores Lawrence’s brief time in Australia during WW1 in exile from his beloved Cornwall where he writes the controversial novel Kangaroo. The turbulence and violence between the Lawrence’s forms important aspect of the play as the feuding Lawrence and his German wife Freida, alarm and challenge the locals. Although the play perhaps avoids touching directly on a full auto-biography (for example Lawrence’s noted bisexuality) it’s an engaging look at a titan of English literature and his turbulent relationship down under.