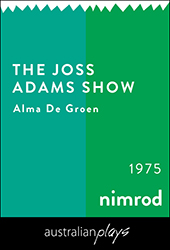 One of the first new wave plays to raise female consciousness in a movement which was almost entirely male-dominated. Joss gives a unique insight into the state of mind of a woman with post-natal depression. A savagely comic play whose strength lies in the tension between the comic inappropriateness of the social behaviour and the 'reality' in the mind of the audience; in this case the death of a baby.