I'LL BE IN ON THAT 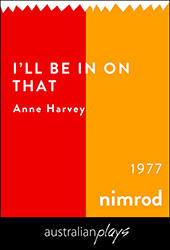 I'LL BE IN ON THAT

This script is part of the Of the Island Collection

I’ll Be In On That offers a comedic, often sprawling look at the Union movement’s history in Australia drawing on documentary material ranging over the gold digger’s licences; shearers unionising; the birth of the Australian Labor Party, its effect on the average Aussie; and the birth of the ACTU. Whilst the Union landscape may have changed, and even diminished, the play shows the strong stylised presence of overt politics, sadly absent from our mostly small-L Liberal stages…

In Harvey’s play, Jack, our champion of labour, and Bill, our champion of capital, pit wits and views against one another with true Aussie camaraderie, while a sexy, sensual (and smart) Public Opinion determines the winner (and secretly demonstrates how fickle we really are). It is the story of Labor versus Capital from the beginning in 1834, told with a style that is a combination of soapbox oratory, vaudeville and sincere realism.