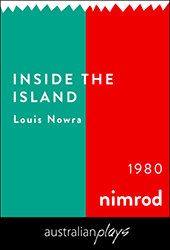 In Nowra's play, images of whiteness, and of the haunting of white Australia by its violent past are given vivid metaphorical treatment. The play is in many ways a ghost story, illustrating the irruption of the past into the present. Set on a remote wheat property in western New South Wales in the summer of 1912, where a picnic/cricket-match is held amongst raw-recruit soldiers sent to this isolated spot on peacetime manoeuvres. The cricket ground itself had previously been an Aboriginal campsite, and was granted as a 'gift' to the government by the dead father of the property's current matriarch, Mrs Lillian Dawson. At their Captain's request, Lillian makes the men a gift of flour milled from wheat grown on the property, which is then made into bread for a picnic cricket match held by the soldiers. But when tragedy seems to strike, questions are asked about Lillian’s real intentions and her love for this island continent is questioned. Concerned with the mechanics of power and isolation, the inheritance of violence and dispossession, this is a stirring play looks at our own views of the land we inhabit and questions whether white Australia can ever escape it’s past when it still hides from it.