by FF Piano (the pen name of Margot Hilton) 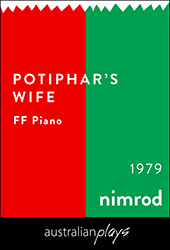 A single woman stands on stage – she is a modern Potiphar’s wife – seeking strength and independence. But she’s trapped by the expectations of traditional role-playing, and dares to enunciate her own sexuality and desire – eventually settling for revenge. This is a formally brilliant and wickedly perceptive play – a cast of various sized dolls is required for example. The text flows with images of clarity and wit whilst drawing on a Jewish literary tradition of the original story. It remains a work about a woman in her own time – abandoned by her lover with child – and seeking revenge/love/connection.