THE ELOCUTION OF BENJAMIN FRANKLIN 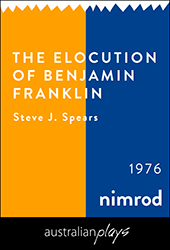 THE ELOCUTION OF BENJAMIN FRANKLIN

by Steve J. Spears
This script is part of the Nimrod 50 Collection

A single actor plays "Robert O'Brien", an outwardly respectable elocution tutor based in a suburb of Melbourne. The play begins with O'Brien walking on stage naked, describing the foibles of his students as he dresses. It is revealed that O’Brien himself likes to dress in feminine clothing and is obsessed with a young, beautiful student, one "Benjamin Franklin". The final revelation that he is confined in a "mental institution" challenges our assumptions about mental health, the treatment of queer lives and the private world of public figures.