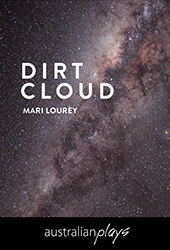 by Mari Lourey
Thirteen year old Spook is more preoccupied with Astrophysics than taking notice of what is happening around her on Earth. Her mother Mannie, exiled from her mining magnate mother Bill who unbeknown to Mannie is dying, knows in her bones that it’s time for reckoning. Spook’s father, a Fisheries scientist who is Indigenous, is soon to become redundant. He also recognises that it is time to return to the place of his birth, from his own (partially) self imposed exile. All this is compounded by the fact that their southern farm is severely environmentally compromised, and there's a coal mine on their doorstep.

A trip across country with a recalcitrant Spook - on the cusp of being accepted into Australia’s first ever junior space program - to Mannie and Eddie’s place of birth in the north west of the country will tilt Spook’s axis in ways she could never have imagined.

Events that unfold at Twin Hills, a former pastoral station that is now eponymous with a global mining company, will redefine their lives.

A closely missed tragedy leads Spook to accidentally discover an ancient water source, just as she is set to inherit her grandmother’s property which is home to ancient lore grounds that have been used for millennia, but that also contain rare precious metals that are about to be mined from a nearby asteroid by Australia’s first satellite.

By the play’s end a transformed Spook – the ancestral child of two conflicted cultures – has to consider anew, what it means to belong and what responsibilities she will accept: will she embrace the three dimensional grid of knowledge - connecting astronomy and the earth bound world - that has developed, uninterrupted over thousands of years, longer than anywhere else on this tiny planet hurtling through space?