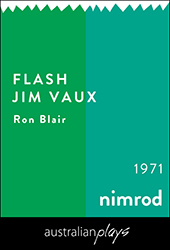 A ballad opera about a convict who was transported three times to NSW. A boisterous and touching portrait of a Regency dandy turned lag. The play is in the form of a ballad opera, tracing, (rather loosely) the life of James Hardy Vaux during the period 1807 to the 1840s. James was a quick-witted, notorious pick pocket and swindler who led a remarkable full life while travelling back and forth across the globe (all expenses paid). His life crossed paths with many rich and varied characters, some of whom influenced his life, some of whose life he influenced. Either way these are the people who made our country’s history.

"Flash Jim Vaux is right at home in Darlinghurst’s little playhouse with reeks of atmosphere from a similar age and Flash Jim at home is colourful, naughty and thoroughly irresistible". - Robin Ingram - Sun. April 30, 1971.