SOMETHING MORE THAN NIGHT 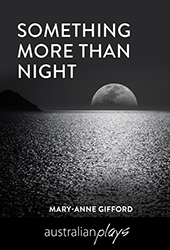 SOMETHING MORE THAN NIGHT

by Mary-Anne Gifford
Magnetic Island, April 1959. Stones have pummelled the Britton home for the past five nights. The attacks seem focused on 12 year old Lillian Britton. The stones smash through her bedroom window, cut the skin above her eye. Local Sergeant, Joel Regan, organises volunteers to guard the family at night. Scores of men turn up to the house armed to the teeth with guns. Detective Inspector Raymond Harvey comes from Brisbane to assist with the investigation. Raymond spent his first fifteen years on the island and has never been back. Memories of his father threaten to slow him down. Constance Farewell, a journalist from Sydney, arrives on the same ferry. Her mother is indigenous Australian and her people were the original inhabitants of the island. Constance has never set foot on the island and she fears a story her mother told her will come true, that she’ll be swallowed by a huge carpet snake and dragged into the sea. Raymond and Constance are distrustful of each other but they join forces. They discover that Lillie’s sister, Ruth Britton, died three months earlier. Is the stoning connected to Ruth’s death? Mr Harry Moors, a friend of Sir Arthur Conan Doyle, breaks his journey to Samoa to investigate. He arranges a séance and builds a trap in the roof to catch a poltergeist. Lillie’s other sister, Violet, is 23 and never been in love. Private Detective Joseph Colbran arrives by boat in the moonlight and all that changes. Joseph promises to solve the mystery in two days. But it’s hard for anyone to uncover the truth when everyone is hiding something. And in the search, one person is shot and another tries to jump into the sea. Ruth Britton died when she didn’t have to. This is what happens next.