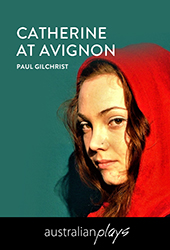 by Paul Gilchrist
In a world of corruption, decadence and intrigue, a lone woman confronts the most powerful institution of her times.

Set in fourteenth century France, and inspired by actual events, Catherine at Avignon is the story of an extraordinary personality. Branded a no one by her society, Catherine fearlessly took on kings and queens.

Avignon would be her greatest challenge.

Bawdy and bloody, exuberant and irreverent, “Catherine at Avignon” is a very different inspirational tale.

...a triumph of narrative construction. Like Stoppard, Gilchrist is great with words, and amply demonstrates it in scene after scene of highly amusing and erudite verbal sparring... a superb and very playful rendition of modernist theatre...the audience is treated to a subtle, and subtly informed, inquiry into theatre itself – as art, as entertainment, as philosophical meditation…a significant achievement in writing….. Gilchrist is obviously a playwright worth watching - Media Culture

Amidst the sin and sarcasm are startling moments of poetry…the telling of it this story is very modern. It’s not so much about piety and saints as it is about authority, celebrity and the way we interact with the spiritual. Sounds complicated, and it is, but what Catherine at Avignon does is akin to soaring - The Brag

a thought-provoking piece on the importance of truth and purity of spirit in a world gone mad... the script is the real star. Both poetic and whimsical, Gilchrist seamlessly weaves olde English and 21st century language to jolt us between yesterday and today at will. The problems and the turmoil of the 14th century are clearly still relevant to today’s crazy world - Alternative Media

a thought-provoking, uplifting performance that leaves the audience hopeful for a better world. Gilchrist's script is clever and engaging - Aussie Theatre