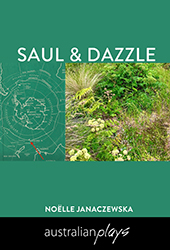 by Noëlle Janaczewska
On cold, wet, windswept Macquarie Island, Saul and his dog, Dazzle, have formed a strong bond—although sometimes it’s hard to tell who’s handling who. But as Saul’s time on the island with Dazzle comes to an end, it throws up memories of another break-up.

In 2014 the Australian Government concluded a seven-year initiative to rid Macquarie Island of invasive species and make the island rabbit and rodent free. The final stage of the program involved a team of specialist detection dogs and their handlers.

Saul and Dazzle are fictional creations.