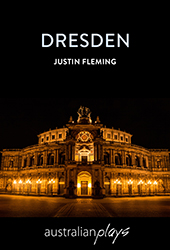 by Justin Fleming
In 1838, poverty-stricken and on the run from creditors, Richard Wagner writes his first successful opera, Rienzi, which is performed at the Dresden Opera House on October 20, 1842. The story of Rienzi takes place in Rome and is based on the life of Cola di Rienzi (1313–1354), who succeeds in seizing control and raising the power of the people. But popular opinion soon turns against him. In the end, the people burn the Capitol in which Rienzi and a few adherents are bunkered.

When Adolf Hitler is 17 years old, he sees a performance of Wagner’s Rienzi with his friend, Gustl Kubizek, a young musician. The teenage Adolf is so obsessed by Rienzi that he insists he and Gustl write an opera together. When Adolf’s attempts at opera fail dismally, he embarks on his next terrifying adventure – to “save the German people” through political action. But in order to gain legitimacy, Adolf visits Wagner’s widow, Cosima, and begs her to give him the master copy of Rienzi which he will keep in the Berlin headquarters of the National Socialist Party, using Wagner’s music for public rallies and marches.

Both Gustl and Cosima try to warn Adolf about something he seems to have overlooked. In modelling himself on Rienzi, he assumes the mantle of the hero who is raised by the people but finally goes down in flames. Did Adolf actually want this? In1945, Dresden is fire-bombed to total destruction. The Opera Theatre and the manuscript of Rienzi are burned to ashes, and along with it, Adolf’s terrible mission comes to its end.