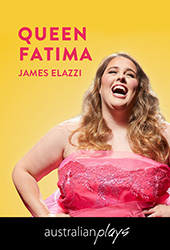 Pressured to be married with children, 30-year-old Fatima seeks glory at the Queen Lebanon Australia pageant to gain the respect of her boyfriend’s high-flying lawyer parents. But how can a baker’s daughter transform herself to prove she is worthy of his love?

With the help of her 74-year-old best friend Gada, Fatima shows that narrow-minded ideals about diversity, looks and valuing each other, are no match for her stereotype-busting plans.