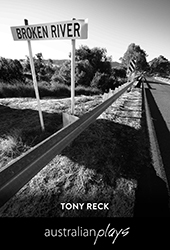 by Tony Reck
'Those who talk, don't know. Those who know, don't talk'. - Carl Williams

Broken River is an expose of the dark heart residing beneath the policing of crime in contemporary Melbourne. A dismembered female body is discovered in country Victoria. Detective Sergeant Peter Rowstone of Major Crime pins career criminal Marlene Corchoran as the prime suspect. But Rowstone himself has a few questions to answer. What was he doing at Broken River the night Junie Patel was murdered? Why was he high on a cocktail of Viagra and MDMA? Rowstone constructs an elaborate conspiracy. Behind this conspiracy malingers The Brotherhood: a secret organisation of powerful men who engage in depraved rituals at an isolated country lodge. Who did kill Junie Patel? What are the consequences for the parlous state of democracy in Victoria and its fragile Rule of Law? This is Broken River: a play by Melbourne writer Tony Reck.

'In Victoria, there isn't much corruption. They kill you down there'. - Arthur 'Neddy' Smith

Broken River was developed in collaboration with director Richard Murphet and cast and crew from the play's 2019 production at Melbourne's La Mama Theatre.