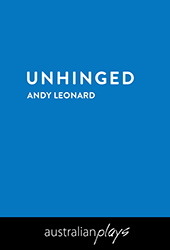 by Andy Leonard
Agoraphobic alcoholic Shane moves back home after an accident. He’s told he can stay six weeks. Fourteen years later, he’s still there, creating havoc, taking away any hope of a happy retirement for his parents. When people and violent events of the past emerge, the family will never be the same again.

Unhinged is an irreverent black comedy, exploring what happens when a family becomes so insular, it implodes on itself.