by Alana Valentine
It is July 1854 and gold has been discovered in Australia. Two miners, one fresh from the California gold fields and the other a "new chum" from Sydney, board the Julia Ann and sail for Melbourne to seek their fortunes on the Ballarat gold fields. The play tells the story of friendship which develops between the two men -- from their experiences aboard ship to life on the gold fields helping each other dodge the license hunters. Frank, the Australian, becomes increasingly interested in the agitations of the Ballarat Reform League and, despite Stan's urgings, becomes caught up in the Eureka Stockade. A new take on the well-known story of the gold fields, this play dramatizes the choices of new friends caught in desperate times. As an education tool the play brings alive the language of the gold fields and dramatizes Australia's first cry for a republic. 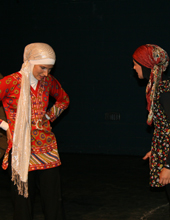