THE GREATEST WOMAN IN THE WORLD 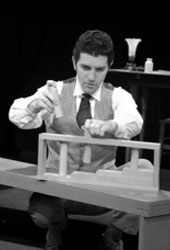 THE GREATEST WOMAN IN THE WORLD

by John Bishop
"Why did you abandon me, Mother, why?" For half a century, Maria Montessori has avoided the question asked by her illegitimate son. But the sparkling young woman who smashed glass ceilings and was introduced to a packed Carnegie Hall as "the Greatest Woman in the World" is now old and vulnerable. As she re-lives her glorious but controversial past, her son probes for answers to the mysteries of his early life. How could a woman whose life was devoted to children abandon her own? The result is cathartic for both of them. (Note: An earlier version of the play was produced in W.A. and Melbourne in 1987. The play was completely revised in 2002.)

'An entrancing ensemble piece that explores the nature of bold ambition, its obvious success and hidden pain. It's funny, wise and, at every level, extremely intelligent.'
Sarah McNeill, Subiaco Post, Nov 10, 2007

'The play is compellingly thought-provoking as it traces a life that was revolutionary, ambitious and successful with a subtext of private losses, paranoia and betrayal.'
Karen Marais, The West Australian, Nov 6, 2007