THE SHIP THAT NEVER WAS 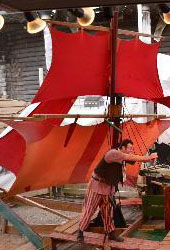 THE SHIP THAT NEVER WAS

by Richard Davey
A play concerning the capture of the ship Frederick by convicts from Macquarie Harbour in 1834 and their epic voyage of escape. This is the short version produced by Zootango Theatre Company in 1986 for outdoor performance. (Variable cast, 6-15.) A longer version is also available.

A solo and duo version was developed in 1993 for performance in Strahan and on Sarah Island in Macquarie Harbour (Tasmania).

This script was updated in 2012. Both original and updated versions are presented together in one PDF. Note to Library Pass holders: only the latest version is accessible