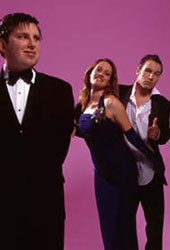 by Stephen Vagg
Social disaster - the high school formal has been banned! The only formal school dinner permitted is for the Athene Club, and that is Nerd Territory. The nerds have what the cool kids want. The stage is set for a battle as to who will control the most important night of the school year.

"...if you don't laugh a lot and shudder at the accurate portrayals of life's little monsters, you're a sad sack and that's a fact." - Dianna Simmonds, Sunday Telegraph, 15 June 2003