BARNESY, THE HARBOUR AND YOU 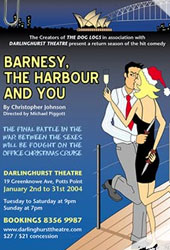 BARNESY, THE HARBOUR AND YOU

by Christopher Johnson
When Vic unceremoniously breaks up with Judy, he sets off a chain reaction of bitter lies that ultimately ends up with both of them hiring professional escorts to pretend to be their new lovers on the office Christmas cruise. Set in the pubs, offices, gyms and apartments of inner-city Sydney, and on Sydney Harbour, Barnesy, the Harbour and You takes a hilarious and provocative look at modern urban relationships. Infidelity, lust, lies and prohibited substances all add to the rapid-fire wit of this ultra fast-paced, cinematic comedy.
'Christopher Johnson writes like a cross between Harold Pinter and Jerry Seinfeld...tit for tat exchanges, powerplays and some byzantine differences between men and women in relationships are held up to the light and revealed in all their shallow glory...this is a light, snappy piece of enjoyable theatre.' Lenny Ann Low, Sydney Morning Herald, July 18, 2003 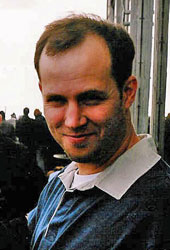