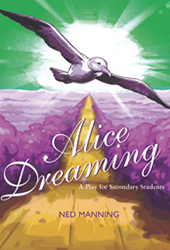 by Ned Manning
Alice Dreaming is a play for secondary students that tells a uniquely Australian story. Trapped by the expectations of others, a girl escapes into her imagination. Following an albatross, Alice takes a journey across Australia that eventually brings her closer to home and an understanding of who she is. Inspired by Alice’s Adventures in Wonderland and The Wizard of Oz, it is a play written about teenagers, for teenagers.

Embracing a non naturalistic theatrical language, Alice Dreaming can incorporate a number of performance elements, including puppetry, mask, music and dance.
Roles suitable for performance by both boys and girls.

Alice Dreaming was performed by year 11/12 Drama students at Mercedes College in Adelaide in 2008. Many of the students had multiple roles. The first scene was re written due to the South Australian SSABSA requirements and became an improvisation based on Alice’s relationship with her family and friends. The friends and family later become the characters she meets in her ‘dream’.

Feedback from Mercedes College:
'The production was very well received by the external examiner. He particularly liked the way the students were challenged by the political material and the fact that they had to perform multiple roles with complex voices and characterisation. Almost all the students received As for their work. Our principal said it was the "best play he had ever seen"…'