by Tee O'Neill
A death, a mystery, an investigation and a degree of subterfuge. STALKING MATILDA is a murder mystery of the 'film noir' variety. True to the genre, the action centres on a beautiful woman of intrigue, Matilda, who is closely allied with marginalised members of the community. But replacing the selfless, determined detective is a Greek chorus, who collectively work to uncover the mystery surrounding Matilda and the death of her husband, Suleyman, an illegal 'alien'.

'...every scene packs a punch which will shake the barnacles from your brainstem.' John Bailey, Beat.
'...proving that a moral tale is a squillion times more effective when it's told in an abstract way with irony and satire.' Rebecca Cook, Inpress Magazine. 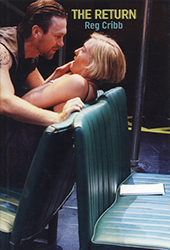