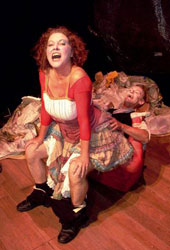 by Michael Beresford
Iris and Brian are itinerants who live rough. Iris is much older than Brian and knows more about him than he does himself. Brian is prone to epilepsy and is not the full quid. He doesn't remember a lot of things. His most precious possessions are his photos that he often plays as a game of Snap with Iris. This gives some order to his life's history.
Brian's abusive father, Neil, arrives to claim a photo from Brian. In the game of Snap that follows, Iris has several photos up her sleeve, and gives Neil more than he bargains for - while simultaneously revealing her true intentions for Brian.