by Elizabeth Bennett
Four very different characters react to a row of three almost identical paintings showing a dead hare and a dead pheasant, painted by W.B Gould. "Oh my hat and ears! Is this someone's idea of a joke?" The March Hare, now retired and living in Hobart, is outraged and deeply offended. Mr Brewer wants to buy one of the paintings for his wife. Alice Liddell knows exactly how the pheasant felt, and the artist's wife just wishes Gould would go out in the sunshine more often. 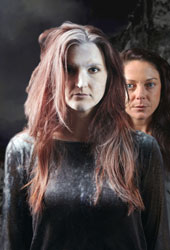